When my friend told me she heard on NPR that there was a new book out in which “some female philosopher” resurrects the voice of Plato to address today’s moral issues, I took a wild guess as to the author: Rebecca Goldstein. 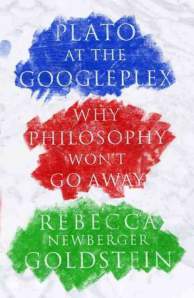 Maybe the guess wasn’t so wild. I had read The Mind-Body Problem and there aren’t that many right now contemporary female philosophers I know of who are well-versed in Plato and who write fiction. (Although in hindsight I suppose Muriel Barbery would have been a good guess too.) This, I said to myself, is a must-read. For those of you who are reticent about reading philosophy or find the language a bit daunting, I highly recommend this book. Anyone on the street can pick this up and understand it. I recently recommended Plato’s Republic to a friend, but then I changed my mind and told him to read this instead. It’s way more accessible.

The book has a hybrid fiction/non-fiction structure in which the chapters alternate between ancient Greek history and fictional dialogue between Plato and several key figures, including a Freudian psychoanalyst, a neuroscientist, and a cocky cable news host. While the history is clearly written and flows like a novel, the real excitement for me comes when Plato is interpreted through fiction, because doing so gives the author the opportunity to cut through academic hemming and hawing to make philosophy come alive. So I’m not going to talk about the history sections very much. I’m going to focus on what’s new and salient in Plato @ the Googleplex:

Goldstein argues against the idea that science alone can lay claim to all knowledge. While science progresses, so too does philosophy. I’ve written about this topic in an earlier post. This is the major point throughout her book.

Is it immoral to be politically abstinent? Goldstein asks in the chapter Socrates Must Die. An interesting question when you consider Nazi Germany. I couldn’t quite find her conclusion to this question, or if her purpose was simply to interpret Socrates’ position, but it’s a good question and one I’ve asked myself many times. Her interpretation of Socrates is much more multi-faceted and complex than I.F. Stone’s anti-democratic version in The Trial of Socrates, which reduced Socrates’ motivations to exclusively political terms as if all he did was play party politics with the rest of us.

The unexamined life is not worth living…a pretty strong claim if you think about it. Are all those reality-TV-watching, celebrity-following lives—these are my words now—really not worth living? This smacks of worse-than-smug elitism. Goldstein anticipates the standard protests that Plato was an elitist, not fighting the charge so much as explaining why his views make sense. The philosopher kings don’t rule according to their whims, but according to what’s good. Might does not make right. If people were truly capable of governing in this way, the elitism in the Republic would not be a bad thing, even if it meant a small group of moral experts telling everyone what to do. After all, we trust the dentist with our teeth, we trust the doctor with our health…ah…maybe…we trust the tax guy with our taxes…okay. Well. You get the idea.

The best answer to the elitism charge comes in the chapter, Plato at the Googleplex. There she has a software engineer defend an interesting form of democratic knowledge. He proposes an Ethical Answers Search Engine, EASE, which he thinks would be superior to having moral experts. The folks at Google could devise a way to crowd-source wisdom so that everyone’s an expert and no one a ruler. But, Plato points out, who determines how EASE operates? Who programs it? Aren’t we back to the same elitist government in which the few rule the many? Brilliantly done. This chapter is my favorite for its literary finesse and depth of ideas.

In the final dialogue, Plato gets his brain scanned and discusses with a neuroscientist whether or not science has the final word on moral agency, whether neuroscience eliminates the Self, as well as right and wrong. The neuroscientist scoffs Plato for invoking a “ghost in the machine,” and claims that there is no free will, only imagined free will. Plato can’t outright disprove the neuroscientist’s claims, there are no arguments against per se, but he and a cognitive science grad student appeal to common sense. Where in all those numbers is there a coherent account of who we are? How can we hold people responsible for their actions without free will? How can there be rationalizing with no rationalizer?

This last chapter hits on what has been a hot topic in the blog-0-sphere lately. What do y’all think? I’m going to assume that most of you find it at least odd, if not wrong, to claim there is rationalizing with no rationalizer, but is there a way to disprove scientific reductionism or do we simply have to appeal to common sense or experience? Is it enough to say that science can’t lay claim to all knowledge because doing so is doing philosophy—which undermines the original argument?

Or how about another question for those who don’t want to weigh in on the first. Is it ethical to be apolitical? Are we morally obligated to “rock the vote”?

Or just comment on whatever. That’s more democratic, right?

6 thoughts on “Book Review: Plato at the Googleplex”