I’ve been asked to take the torch from The Leather Library for the next leg of the Writing Process Blog Tour.

Right now I’m working on a novel loosely based on Plato’s life and philosophy. This week it’s been on hold while I figure out what to do with the “sagging middle.” For those of you working on novels, you know this is a real test of how you fare as a writer.

Also, I have a few ideas for upcoming blogs. I’m reading My Sister’s Continent, a novel by Gina Frangello that rethinks Freud’s case study of “Dora.” And guess what? Exclusive blog-sized interview coming up soon!

I have a few more interview ideas in mind, as well as a writing challenge for you, once I can work out the logistics.

2. How does my work differ from others in its genre?

So far as I can tell, there aren’t that many others in this genre, so it’s not terribly hard to be different. I’m not sure there’s anyone who’s written a novel that elucidates Plato’s philosophy through the eyes of a contemporary philosopher. The book that most closely resembles what I’m doing is Sophie’s World in that it combines puzzles and mysteries to engage the reader. That novel, however, is about the history of Western thought and is geared toward a younger audience. Mine starts off with a sex scandal and deals with issues of political correctness, religious piety, the justification of beliefs, and what makes a life worth living.

As I talked about in my “all about me” section of this blog, I write fiction because I think it’s a more direct and often times more accurate way of conveying philosophies. I also write non-philosophical stories, though.

It’s taken me a long time to come back to fiction, especially after so much dry, philosophical reading and writing. I eventually took a very inexpensive class at a community college, thinking that it would be awful, but it turned out to be a lot better than the classes I took at a very expensive liberal arts college. If you’re considering getting into fiction, I would suggest doing this. The class was mostly older adults, including book editors and journalists, working on novels, and they returned year after year to get critiqued. This was the launching point for me. I’m no longer taking the class, but I did start a writing group and they’ve been instrumental in getting me to produce on a regular basis.

I love my writing group. They’ve called me out on so much crap that I would not have found otherwise! I highly recommend getting a group of 6 or so people to do this. If you want to know more about our format, leave a reply. We make sure it’s highly structured, but with room for fun.

4. How does your writing process work?

I love this question. Everyone’s different, so you get to find out all the quirks about people. I don’t stick to a schedule. I don’t pressure myself and beat myself up if I don’t write every day. In fact, a guy in my writing class said something like, “Professional writers write every day.” And the teacher called him out. “Really? I don’t have time to write every day. I write when I can.”

I don’t stare at the blank computer screen. I find that useless. I wait until I have a vague idea of what I’m gonna write before I even go to the computer.

I forget people’s names in real life, so of naturally, I forget my character’s names too! I also have a tendency to leave out what people look like, and my writer’s group constantly gets on my ass about it. So here’s what I’ve done: 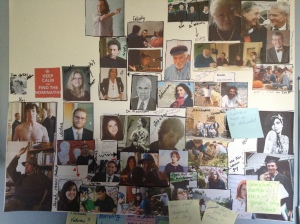 I’m looking at this right now. I write notes all over the pictures, just short clips of the character. I ripped photos off the internet by googling things about my character such as “mousy girl” and picked photos that I thought exhibited my character. Sometimes I have a character composite, which includes pictures of different people that all add up to one.

I also have maps all over my room, mostly of Greece, but also world maps, ancient city maps, etc.

I like to have a lot of clutter around me when I write, which is diametrically opposed to what I like elsewhere in the house.

I tend to vomit forth and come back in later with a machete. My group is always amazed when I hand in my rough drafts each month and I never fail to meet the 25 page limit. What they don’t realize is that those 25 pages are likely to be cut altogether.

When I hit a brick wall, I go for a long hike. I find that after 5 miles up a mountain, my brain stops working. It’s usually on the way down when ideas come, as if by magic. I can’t explain what happens on the mountain (it’s always the same mountain), but something about sweating my ass off in the middle of the desert makes things happen. In fact, that’s how I got the idea of writing Philosopher King in the first place. The professor’s voice just came into my head in the form of a lecture about crossing bridges.  The voice is much more professorial, but this is the gist: “Would you drive across a bridge that had been built based on a hodge podge popsicle stick model? Well that’s the nature of our knowledge, and we do it every day.”

Shorter hikes don’t work. It’s gotta be a difficult terrain and 10 miles round trip. Don’t ask me why.

A woman in my writing group has a giant refrigerator box with each detail written on a Post-it note. It looks insane, but it works for her. Another woman is a busy mother who writes on scraps of paper in the car.

People say all kinds of things when it comes to writing, but I take them as experiments. I try out different things and see what happens.

Now I’m passing the torch onto you. So far two bloggers will be continuing the race. If you’d like to participate, let me know and I’ll add a link to your blog.

Kevin Sterne has an informative blog chock full of writing tips. I recently had the pleasure of reading his risk-taking short story, Savior, written from the point of view of a pedophile.

Millie Ho is a YA writer and illustrator. Check out her blog post on writing environment.