Lex Solo has asked me to write a blog post about the forms of government in Plato’s Republic: Was Plato’s Republic truly a political work? Was he really anti-democratic? Here is some of what I had to say on the matter (the original post on Lex Solo’s blog with the explanation of political forms is here):

Is the Republic a work in psychology?

YES. A lot of people read the Republic as primarily political (given the title, and the fact that it’s taught in political theory classes, and quotes like the one below, it stands to reason) without giving much thought to the questions that kick-start the whole enterprise. But I’m not sure we can take Plato’s political theories here at face value.

Socrates tries to defend the view that justice is to be sought for its own sake. Might does not make right. Doing the right thing will make you happy—quite a claim!—and doing the wrong thing, even if it seems enticing, will only harm you.  In order to see what justice is and whether it is to be sought for its own sake, Socrates asks us to imagine the soul ‘writ large’ and from here he goes on to describe it as a city. (We have every right to ask whether this analogy flies, but that’s another question for another day). 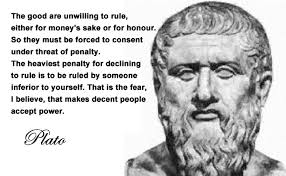 The first attempt to scale up the soul is often referred to as the city of pigs. It’s a simple commune that has everything required to meet its basic needs, but no luxury. Each person in the community specializes in a particular skill, such as farming or carpentry, and ‘minds his own business’. There is no need for warfare because no one seeks out anything in life except the bare necessities of food and shelter, etc. Anything but the simplest art forms—maybe a few happy folk tunes, for instance—are deemed frivolous. These simple communal people want for nothing, but Glaucon, Socrates’ interlocutor, finds this city repulsive and insists its inhabitants should have the luxuries which he thinks are necessary for a good life.

Who doesn’t want to enjoy a nice glass of un-watered-down wine from time to time, right? Maybe a little Tomme de Savoie to go with it?

Who knew you’d have to go to war for it.

From here we move on to the rest of the Republic, in which Socrates describes the ‘feverish’ Kallipolis, The Beautiful City. A glorious exposition of forms of government, education of the ruling class, etc, follows. So glorious we often forget where it all started. At this point it’s important to recognize that what is described from here on out is no longer ideal in the sense of perfect, or unflawed. After all, the Beautiful City is fevered, sick, unhealthy. It begins with a flawed premise to describe the human soul as a soul divided against itself.

After the idyllic city of pigs, we have nothing but war and strife on a grand scale. The repugnant concept of philosopher kings leads some to come away with the sense that Plato endorsed fascism, but when you compare the city of pigs to kallipolis, the opposite would seem to be the case; it would seem if he endorsed anything, it would be a communal lifestyle. But we must keep in mind that our lust for luxury is a part of what makes us human (if only we could be pigs!), which seems to suggest we, being who we are, will never realize a perfect state. The philosopher kingdom cannot last long.

Socrates’ city of pigs is the garden of Eden from which we have been expelled.

The Kallipolis is an origin story about human nature, the soul divided against itself.

We have desires for things beyond the necessities of life. This is what it means to be human. How do we satiate our desires? Is it possible to achieve happiness in a sick soul?

Not all is lost. We have reason as our medicine, our guiding light, our means of tempering excess desire. By exercising moderation, we can achieve something like inner justice, happiness. This happiness wavers—we’re only human, after all!—and it degenerates from time to time when other influences take over, but with ever-renewed vigilance, we can perhaps bring about an imperfect—and maybe for that reason a more glorious and spectacular—harmony of the soul.

9 thoughts on “The Harmony of the Soul: Plato’s Republic”