I confess, I didn’t make it to midnight last night. I left the party at ten, got in bed and the last time I looked at the clock it was 11:45. It occurred to me to stay up for another 15 minutes, but I my eyelids vetoed that proposal.

I’m not into making a big deal of New Year’s Day because I’m sure it will be a day like any other, and probably a year like any other. That’s neither pessimistic nor optimistic. Perhaps just a little blah and anticlimactic.

However, I woke up this morning to an unusual phenomenon: snow on the Catalina mountains. 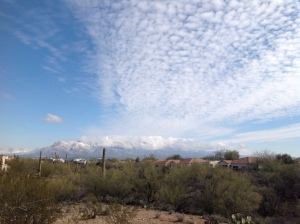 I gazed out my living room window at this extraordinary view, dreamily enjoyed it for a few seconds, then decided to step outside to take pictures. Just after I took my pictures my focus shifted to various quotidian worries such as the nipped bougainvillea, how the Saltillo tile needs re-coating already, how the telescope should not be outside but I wasn’t about to do anything to make that situation change, etc. Then I thought about posting my pictures on my blog. So quickly I’d lost sight of the very thing that brought me outside!

Yet I was lucky enough to realize that I had given up an opportunity to see something differently. I noticed the radio tower off in the distance and remembered that just yesterday my husband spent a good hour driving around in the rain to chase down a mild curiosity that he’d had for the five years we’ve lived here. He drove to the base of that radio tower and noted the streets at which it was located: Zinnia and Kain. He mapped it. He oriented himself with our world. He came home so very pleased with himself and his fresh dot on our map.

This is an activity that would never occur to me, but he does such things on a regular basis. He can busy himself with looking at maps for hours on end or watching weather on the internet. Of course, stargazing is one of his nightly rituals. Sitting around in a mall or even a Costco parking lot is a perfectly enjoyable activity for him. He’s an older fellow, so the pigeon-feeding cliché probably applies here.

On another occasion he called me outside, “Tina, come here! Quick! Check this out!”

“The clouds are disappearing!”

“Yes, everyone knows that.”

“But you can see them disappear. You can watch it happen!”

I probably literally rolled my eyes. I was probably “busy.” Nevertheless, those of you who are married know you don’t just shrug off your partner’s enthusiasms, no matter how tedious they seem. (Unless it means watching The Sorrow and the Pity. Again. Then you’re excused.)

So we proceeded to spend fifteen minutes pinpointing a specific portion of cloud that we could both observe. He assured me that we’d pick a fast-disappearing cloud so I wouldn’t get too bored.

It’s very difficult to describe the location of a wispy portion of cirrus cloud. It involves a lot of emphatic pointing, usually to no end. We said things like, “It’s that scorpion tail-looking thing an inch above the red roof house.”

“Two inches above that tree from my point of view.”

“Then we’re not talking about the same thing.”

Finally we found a portion of cloud to settle our sights on and we sat there watching it. And by God, it’s fascinating. It’s not a spectacular or momentous thing, but if you stare long enough, you get to feeling your eyes are playing tricks on you. 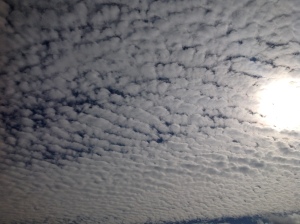 You notice things you didn’t before, such as the way the mind freezes clouds into a kind of photograph, which ends up being a lie that you tell yourself to get on with life, otherwise you’ll end up becoming a philosopher like Thales and you’ll find yourself at the bottom of a well. Or in Cloud-Cuckoo Land.

But when you pay attention, you see that these clouds are constantly disappearing, and not as slowly as you may think. And you can watch it happen. You can see it. I’d never seen it before.

I’m not taking up meditation or yoga. I’m not a new person. Nothing has changed really. I didn’t really learn anything useful from viewing this phenomenon…I already knew that clouds disappeared. But sometimes we need to play, actually carry out our daydreams, follow through on whims.

As a writer I should be naturally inclined to do such things, if only for the sake of describing things freshly, but I’m not. I don’t want to make this a New Year’s resolution—that seems a little too exacting for such a goal—but I hope in the future to allow myself more time and freedom to notice the world around me in a new way.

Have you ever chased down a mild curiosity?

Do you have any?