One of the best things about living in Tucson (besides the Literary Festival and the desert itself) is the Gem Show, which comes every year in February and lasts about two weeks. And of course, being Tucson, the whole set up must be funky.

Vendors and buyers from all over the world come to take over the city. I mean that literally. The show is not in one location, but scattered all over, sprawling far into the east side. If there’s a defunct lot somewhere, you can be sure to see a few tents camped there. Vendors frequently set up shop in motel rooms, leaving the doors open for all to enter. (It always feels so creepy…often times people will leave their hotel trash scattered amongst their wares. Let me tell you, the vendors do not eat well.) Food trucks appear to feed the masses, parking lots fill up, shuttles run back and forth. The whole thing is kind of chaotic, like a carnival. Although I try to make it each year, I’ve really only seen maybe 1/10th of the show, if that. I haven’t seen any of the precious stones (apparently there’s the sapphire trail, the emerald trail, etc.) because I’m more interested in fossils.

Even if you’re not into starting a fossil and/or mineral collection, you can always come to admire the amazing specimens. (These are actually not the most amazing ones…but I was in a mighty rush to get home this year and I barely remembered to take photos to show you. I wish I had thought to take these with someone standing next to them so you could see the scale of how huge they are):

These two amethysts in the picture above are probably two feet taller than me…so about seven feet tall. Wouldn’t that look outstanding in an entryway? I’d feel like queen coming into my castle. The ammonite sculpture in the photo to the right is about six feet tall and far wider than my arm span.

Last year I spent days wandering around, picking out beads, admiring fine specimens, listening to people haggle in foreign languages. This year I had to limit myself to my quest to find a Himalayan salt lamp which I promised my friend I’d get her. (We were admiring one in Oklahoma that was priced five times higher than what I can get here.) The one I got her is a little bigger than mine (below). And if you run out of salt, you can just scrape some off your lamp and put it in your food: 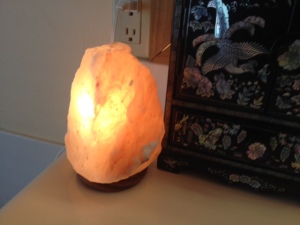 While those really nice fossils above are pricey, there’s a lot here that’s super cheap. The salt lamp above was ten bucks (and the vendors will say it purifies the air…wellllll…anyways, it’s neat-looking). You want a palm-sized trilobite to give to the kids? Two bucks. A bead with a fossil in it? One dollar:

Other things we bought in the past: 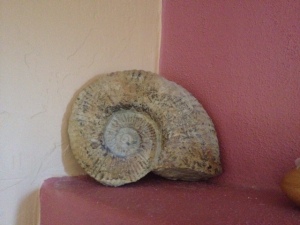 These were a little more of a splurge…but I couldn’t be happier to have this smiling crocodile in my living room.

Even though prices are already reasonable, you must haggle, just because…if you don’t haggle, you’re a sucker. And if you don’t haggle, there’s a chance the other vendors will hear you and they’ll price accordingly. So you’ve got to play the game. That’s half the fun.

Of course, if you buy in bulk, you get a better deal and more bargaining leverage. But a lot of the show is open to the public for those not looking to resell. You can also get amazing functional things made out of fossils, like this sink (left):

Or this Kleenex box holder:

Or this…thing. Whatever it is:

Or you can do what we’ve done and incorporate fossils and stones into the shower walls like a mosaic (terrible photo, I know):

While I’d never really been interested in such things before, it feels like the right thing to do now that we live in Tucson. Our bathroom now has a fossil theme, which provides just the right amount of Tucson-funk for our Santa Fe style home. It sort of goes along with having a beehive fireplace, Saltillo tile, and a backyard made up of landscape rock and stepping stones rather than grass.

And if you’re not into fossils and minerals, beads and random things, you can always people watch. The characters abound. This is Tucson after all.

What, if anything, do you collect?

Do you incorporate regional-local things into your home, and if so…tell me about them!