I’m announcing a new member of our family:

His name is Geordie and we picked him up from the pound yesterday. My husband and I had been talking about getting a dog for a long time now. I sort of promised him we’d do it, but I kept putting off the idea because I really wanted to travel, and having a dog makes that a lot harder. However, with traveling out of the picture for the near future and with my recent inability/lack of concern for keeping the house clean, I suddenly had a change of heart. “Wouldn’t it be so much nicer to do nothing with a do-nothing dog?” So I expressed my thoughts on the matter and the next day my husband came home announcing he had found our Skippy’s twin at the pound. Our dear little Skippy passed away a few years ago from old age. Here’s what he looked like: 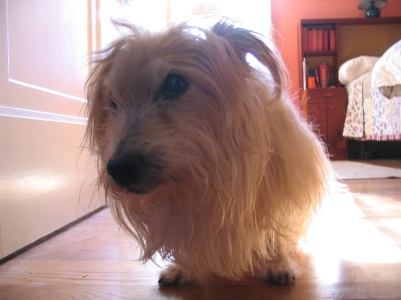 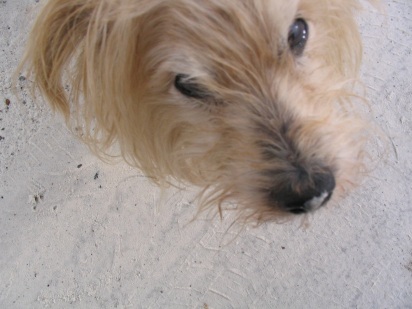 Skippy…we will always love you!

Sunday we snuck into the pound so that I could observe Skippy’s clone. (The pound was officially closed to the public, but I used to walk dogs there, so I knew how to get in.) By dog, there was Skippy reincarnated. We read his papers and found out that Skippy II had just arrived on Friday. I knew this dog would go fast. I’d only walked a handful of dogs that were potty trained and knew how to walk on a leash. This dog knew all of this, and much more. And he was small-ish and ragamuffin-y. No way he’d be around for long. Unfortunately I had an MRI on Monday at the same time when the pound opened, so there was nothing we could do but cross our fingers and hope that someone else wouldn’t get him in those two hours.

Well, we got him! But boy, we didn’t have much time to prepare. We took him home and didn’t even have dog food for him. So while my husband went back out to buy all the dog things, I stayed home and cuddled with my new friend.

I talked his big Dumbo ear off, I’m not gonna lie. I asked him if he minded that we kept comparing him to Skippy, and I apologized for occasionally flubbing his name. I said I hoped he wasn’t feeling “derivative.” “Is little Geordie-poo feeling derivative?” was how I put it. He replied that while he may look just a little bit like Skippy, he wasn’t nearly as “catty.” (How he could tell all this about Skippy from a photo, I don’t know.) I told Geordie that he clearly had a very different personality from Skippy’s, as was evidenced by his above-average cuddling, but since we were just getting to know each other, would it be all right if he could fill me in on his eating habits? For instance, would he ever go on a hunger strike for human food like our gourmet Skippy did? (Skippy always won those…he was a tiny dog and I always feared he’d die.) To which he replied, “Feel this. Do I look like I’ve ever gone on a hunger strike?” And I petted his soft belly. “Now check out that part under the collar,” he continued…”Yeah, there. Now behind the ear…”

Geordie’s perfect for us. He was given up by his owner because she had dementia. He’s clearly used to living with an older person…as is evidenced by his astounding ability to lie about:

I think lately my habits are not too far from an old lady’s, but I plan on walking him every day at least once around the neighborhood. This is something I need to be doing too, according to the physical therapist. Little Geordie’s put on some pounds from his sedentary lifestyle and at this point we are at about the same fitness level. He makes it around the loop, but by the end we’re both dragging. So we’ll go through this together!

But now, we nap. (He does run in his dreams. I suppose that counts for something.)