A few hours ago I got that peculiar feeling that I was being watched. I twisted around on the couch and saw a baby black bear peeking in through the screen door only a few feet away from me. (Sorry, no photos.) It was a great experience, albeit a bit disconcerting for me now that I’m sitting on the same patio where the bear came by. What freaks me out the most is knowing that I might come across one when I’m on a hike and not inside some safe structure—though I realize that a screen isn’t exactly impenetrable. Apparently they can open doors unless you have a good quality round door knob, and it seems your music collection doesn’t scare them as much as your chatter: 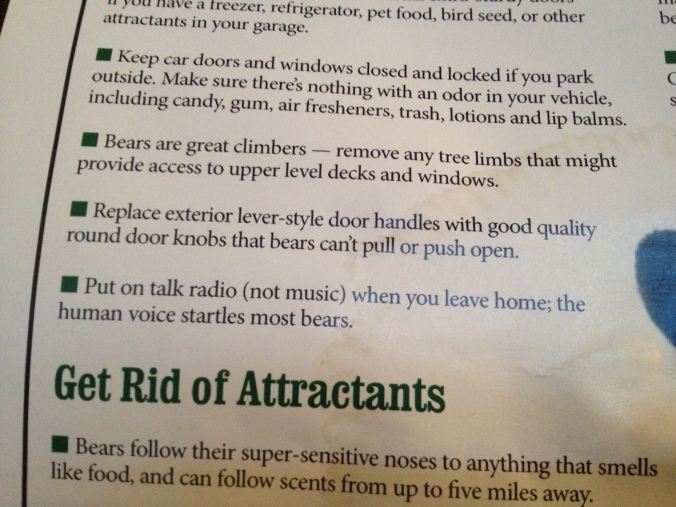 No, there aren’t any black bears stalking around in the desert of Tucson. We rented a place in Durango, Colorado, far away from the 115 degree temps back home. I love hearing people in the checkout line at the grocery store complain about the heat here. 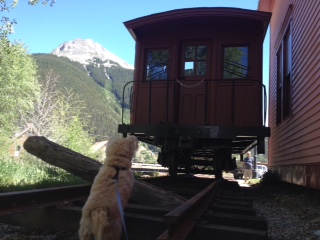 In Silverton, about an hour from Durango, there’s still snow on the mountain, as you can see in this photo of Geordie playing on the train tracks

There are a lot of things to do in Durango, and most of them involve adventure. I’m not into becoming nauseated on the slowly rocking narrow gauge railroad train, nor do I want to face the possibility of falling to my death on a zip line. Yesterday we went rafting on the Animas River. I envisioned floating along, watching birds, waving at pedestrians along the river trail. Instead, we crashed into waves that went far over our heads. I felt like I was in the ocean. If I’d known the rapids would be that crazy I don’t think I would’ve taken my non-swimming husband on that activity. Everything went fine and we both had a good time, but in retrospect that was pretty scary. An older gentleman on our raft went overboard while shooting some kids with a water gun, probably because he was so focused on shooting the kids with the water gun and not on staying in the raft. I think our next venture will be checking out the hot springs spa down the street, maybe at night so we can do some stargazing. (The stargazing here is incredible. I can see the milky way so clearly that it almost seems like cirrus clouds are attempting to block the view of Cygnus.)

As I look into things to do here, the connection between fun and fear comes to the foreground. For some of us, the rush from imminent danger—usually in a controlled and relatively safe environment—is a pleasant experience, and that’s supposed to explain why we do some of the crazy things we do. For me, fun doesn’t come from facing physical danger, or if it does, that physical danger had better be entirely fictional. But I wonder how much of my kind of fun involves overcoming fear of another kind—for me, public humiliation, at least on some level. When I think about the sort of things I enjoy doing, there’s almost always a social component, or a creative element to my activity that involves public scrutiny at some point. For instance, if I do artwork, this will eventually be shown. If I cook something besides a grilled cheese sandwich, someone else will eat it too (and my husband is a gourmet…a published gourmet.) If I play guitar, someone will hear it. If I blog…well, you know.

My partner is a Pilates instructor and professional ballerina…no pressure or anything. On the other hand, the dancer furthest away from me is 80 years old, and putting my whining self to shame.

I am not a dancer by any stretch of the imagination, but recently I’ve been taking flamenco dancing lessons, beginning level. At the end of May we had a recital in which we danced the Sevillanas. This was supposed to be a casual event at the teacher’s house, but eventually became a highly staged performance at a square with 100 rented seats…and that was apparently not enough. The kids had to sit on the floor while others stood around in the back. To make matters worse, we all danced on a set of ‘stages’—platforms really—that were built to protect flooring from the nails in flamenco shoes, and this felt like dancing on a trampoline. Everything went fine for the most part, excepting a shaky moment that apparently no one saw. I can’t say I felt any particular rush of pleasure while dancing in front of an audience. If anything I felt a bit disappointed that I didn’t do as well as I did while practicing in my garage for the month leading up to the performance, but I was happy that I didn’t blank out and forget the steps. I’m not really surprised by this. I tend to derive a great deal of pleasure from the craft side of things, not so much from the performance side. Still, I wouldn’t have practiced as hard as I did without the performance, without knowing things could go wrong.

In writing there’s a similar danger that things could go humiliatingly wrong, although this in a time-delayed fashion. Writing is done in a more controlled environment than public performance, but it is a public performance. The act of writing something down renders thoughts empirical, visible, public. In writing, the work is done elsewhere at the author’s leisure, and so expectations can be set higher, and the audience will naturally be less forgiving than they would be in listening to someone give an impromptu speech.

These things are on my mind now since I recently submitted a draft of my novel for my writing group. I gave myself an arbitrary deadline—my birthday in May—as a way to get through it, finally, and as a way to remember when I got through it should I look back years from now and wonder what the hell happened. Now I’m waiting for the group to meet again in July to do a critique on the whole thing, beginning to end, and I have to admit I’m nervous. I don’t usually get nervous about writing, but this is different. This is the entire novel. Because my writing group will know what happens and where I’m planning on going with my story, they won’t be able to give me the benefit of the doubt on any particular chapter or scene. This is the real test to see if it all hangs together. Things can go horribly wrong here. The stakes are high, not because I’ll be publicly humiliated, but because I’ve spent a good deal of my life on this…and actually, truth be told, failure at this point would be sort of humiliating because I’ve had plenty of time to get things right. Don’t get me wrong, I know I’ll get useful suggestions for any problems; my group is a god-send. But still, what if the whole story just makes no sense and I have to start over? What if?

Could it be that writers are adrenaline junkies of a different, more sedentary breed? Perhaps not the sort to get high on the potential for physical threat, but instead on skirting intellectual disdain from peers?

One of the best bits of writing advice I’ve received was this: Take Risks. This advice seems to hit on something true about most bad writing—it’s boring. I know that my best writing tends to come from risk-taking, the kind that makes me highly uncertain of how it’ll go over with an audience. As a writer I’m not too discriminating about forms of praise, but the best comes when there’s a sense that things could’ve gone the other way. That little bit of danger is what makes the praise all the more meaningful.

Do you find risk-taking fun? Meaningful?

What was the riskiest thing you’ve done? Did you find it rewarding or educational?

54 thoughts on “Fun, Fear, and Flamenco”