This post is a little break from phenomenology and AI, but one I’ve been meaning to write for some time now. I read this novel, Submission, by Michel Houellebecq, without knowing much about the author or the controversy surrounding it…I did this on purpose. I wanted to read it on its own merits, then do my googling later.

Spoiler alert…I give the alert, but this isn’t a plot-driven story. Knowing what will happen shouldn’t ruin it for you.

The novel is about a Muslim party taking over the French government. The fusion of religion into French education and culture is central to the themes explored here. Is this fusion a good thing? Bad? The author leaves us in the dark.

We stay in the first person POV with Francois, a Sorbonne professor and expert in Huysmans (whom I’ve never read, apparently an author of the decadent period who later becomes religious). Francois is the embodiment of everything we dislike about the French. And yet, the novel gripped me, despite the fatiguing je-m’en-foutisme of the narrator. Here, the protagonist’s ennui isn’t the point. Rather, it’s part of the point, but only as a reflection of society, as satire. You get that right off the bat, which makes staying in Francois’ head tolerable. Besides, I found myself laughing at the protagonist at certain points, but maybe that’s a reflection of my sick sense of humor. Humor works, however, and I felt pulled along.

The narrator is too aloof and self-centered to give us much perspective on reality. He seems to be a representative of a whole, either academics in general, French academics in particular, or the bourgeois…I don’t know. He basically bumbles about, mostly in his own head. The politics are talked about, but they remain in the background for most of the beginning. This background—revealed to us in dialogue and little details—keeps the tension going throughout Francois’ cliché existential crisis. The author doesn’t take his protagonist’s lack of raison d’être too seriously, and that helps to elevate the novel to a political and moral realm.

Francois does try to become religious earlier in the tale…sort of. I see this chapter as a character-reveal—Francois tries to mirror his own protagonist’s life story—but more than that, comic relief. Before the absolute Muslim takeover, Francois goes to Ligugé Abbey (where Huysmans had taken his vows) in an attempt to etch out some meaning for his empty existence. Only, there were a few things in the way on his path to heaven:

The modern church, constructed within monastery walls, had a sober ugliness to it. Architecturally, it was reminiscent of the Super-Passy shopping center in the rue de l’Annonciation, and its stained-glass windows, simple patches of color, weren’t worth looking at, but none of that bothered me. I wasn’t an aesthete—I had infinitely less aesthetic sense than Huysmans—and for me the uniform ugliness of contemporary religious art was essentially a matter of indifference. The voices of the monks rose up in the freezing air, pure, humble, well-meaning. They were full of sweetness, hope, and expectation. The Lord Jesus would return, was about to return, and already the warmth of his presence filled their souls with joy. This was the one real theme of their chants, chants of sweet and organic expectation. That old queer Nietzsche had it right: Christianity was, at the end of the day, a feminine religion.

All of this might have suited me fine, but going back to my cell ruined it: the smoke detector glared at me with its little red hostile eye.

He quits the monastery because he’s not allowed to smoke in his room. He can smoke outside. I’m reminded of my time in France…I once saw my Plato professor light up a RYO cigarette in the hallway just outside his classroom, right next to a sign that said “No Smoking.” I consulted with a few students who were also smoking in the hallway. I received a few shrugs and snickers before I decided to light one up myself. I found it thrilling and tried to hide my excitement; they took it as a God-given right. Francois would commit suicide if he had to live in California.

And when Francois says he’s not an aesthete, I don’t know whether I believe him. He does eat microwave dinners (ethnic mostly), but he never fails to mention what kind of food and drink is being served, not even when he can hear bombs going off in the distance. And yet, on the other hand, this non-stop food fixation could simply be French, not foodie-French. Just typical bourgeois French. It’s hard to say, being an American and coming at it from my perspective.

With his food fixation comes a similar sex fixation. His relationships are pathetic and sad, yet it’s another aspect of his life about which he is blasé. Sex, however, is central to his being, it defines him, even when he gets nothing from it. He did once have a sort-of girlfriend, a Jewish student. Out of concern for her safety, she leaves with her family for Israel. He tries to miss her, but in the end he doesn’t.

I’d like to share with you what I consider the most disturbing passage in the whole novel, but one that sums up our protagonist’s character. Francois has just fled Paris, just lost his position at the Sorbonne, and is now unsure where his life is heading. He arrives at a gas station:

The parking lot was deserted, and right away I could tell something wasn’t right. I slowed to a crawl before I pulled up, very carefully, to the service station. Someone had shattered the window, the asphalt was covered with shards of glass. I got out of the car and walked inside. Someone had also smashed the door of the refrigerated case where they kept the cold drinks and knocked over the newspaper dispensers. I discovered the cashier lying on the floor in a pool of blood, her arms clasped over her chest in a pathetic gesture of self-defense. The silence was total. I walked over to the gas pumps, but they were turned off. Thinking I might be able to find some way of turning them on behind the register, I went back into the shop and stepped reluctantly over the body, but I didn’t see anything that looked like an ON switch. After a moment’s hesitation, I helped myself to a tuna-vegetable sandwich from the sandwich shelf, a non-alcoholic beer, and a Michelin guide.

This distance and lack of empathy is meant to be utterly shocking. However, Francois isn’t portrayed as a bad person, but instead a sick person. His only real relationship, the only one which evokes feeling in him, is the one he has with his favorite author, Huysmans (which amounts to self-love, really). When his father dies, he feels no grief. He’s estranged from his family and this matter is treated in a minor way, as a matter of course, yet it plays a huge role in the novel since it contrasts sharply with the cultural upheaval that follows. It’s once again: modern, independent, free-but-morally-bankrupt man vs. family-centered, hierarchical Islam.

Francois ends up finding his raison d’être. He converts to Islam, despite having no religious feeling. In the end, what seems to matter most is not the particular religion he converts to, but having something—anything—to live for. Hence, the submission of modern man. Here we’re reminded of Sartre’s Roads to Freedom series: The protagonist decides to fight against the Nazis not out of moral feeling, but just to have something to do with himself. To give this stance more philosophical credence, you might say he overcame the burden of freedom…you might know the popular phrase—condemned to be free…well, all that, & etc. I tend toward the first interpretation (not a big Sartre fan.)

Of course, there’s a huge difference here: Francois does have a choice, his “submission” is not coerced in any strong way, there are no Nazis at his doorstep, and we know that. But when the moment comes when he must make that choice, we also know his true desires. Francois will submit…he holds no ideals precious, not even humanism, which sits vaguely in his psyche as a sort of cultural embellishment which can easily be discarded. He’s allowed to retire if he chooses not to convert, and he’ll receive a more than fair pension. On the other hand, if he converts, his salary will increase, his prestige will increase, and he’ll be allowed to have multiple wives, all of whom will keep him well-fed and well, um, taken care of. His number of wives goes up in proportion to his salary, which goes up in proportion to his prestige, which has already been chosen for him. He doesn’t have to decide or work much for any of this: it’s been determined that he’s a three-wife sort of guy. He can choose his wives or a matchmaker could do it for him. Francois’ life has altered and, from his point of view, for the better.

What Google taught me about the novel:

“That’s the first fighting we’ve had in Paris,” Lempereur remarked, in a neutral tone. Just then we heard a new round of gunfire, this time quite distinct, as if nearby, and a much louder explosion. All the guests turned toward the sound. A column of smoke was rising into the sky above the buildings. It must have been coming from somewhere near Place de Clichy.

“Well, it looks as if our little soiree is breaking up,” Alice said.

This passage came early in the novel—before the creepy gas station scene—but you get hints of that same eery blasé distancing from virtually everyone surrounding Francois. Notice the last line of this passage. Alice’s comment is the epitome of insensitivity. Which leads me to think Francois stands for an entire group, as a representative.

The questions that come to mind are: Is the novelist implying something sinister and racist against Muslims in general, or is he putting down European ‘modern man’ as morally and spiritually bankrupt? I’m not sure, but I suspect the latter, especially given Francois’ fair treatment in the end if he’d decided not to convert. That’s the wonderful thing about the novel—it lends itself to interpretation and discussion. And it’s a quick read, nothing like Sartre’s lumbering Roads to Freedom, although it seems to feed off of those themes in a fresh way. Submission’s breezy, short chapters make certain unsavory aspects of this novel work, at least for me. The pacing might feel a bit slow at first for those who are used to dramatic openings, but the humor—sometimes risky and grotesque, sometimes light, sometimes dark—keeps the serious and disturbing elements in check. I found myself not really liking the protagonist, but I knew I wasn’t supposed to. His mundane, mostly food-based fixations were well done—a light touch, just enough to provoke a chuckle here and there. The voice is not what I’d call academic, although it seems that way at first. Later you learn that this Sorbonne scholar has a dirty mind, and why we have the phrase, “Pardon my French.”

Last but not least, here’s a photo of Michel Houellebecq which appears as a cropped version on the back jacket cover: 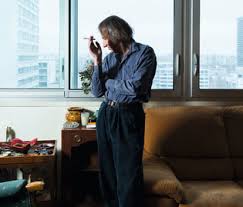