I’m in Pebble Beach looking out over the Pacific—peaceful & conciliatory—and I don’t have much to complain about, especially when I think of the triple digit temps back home in Tucson. I don’t mind that I’m in the June gloom, as natives call it. I love the moodiness, the East Coast-ness. 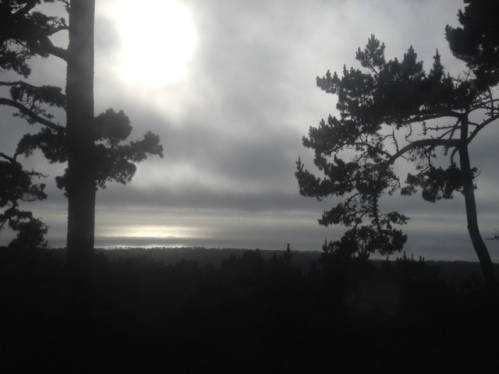 It’s cold and damp, but people seem convinced that they can catch a tan just because it’s June and it’s California and they ought to be able to sprawl out on a sandy beach in bikinis. I wear pretty much every article of clothing I packed and shake my head with amused incredulity at those kids. They’re all young and hopeful, you see. The sun will come out in a minute.

Here’s the real June Gloom: Another mass shooting. Another round of talking heads discussing gun control and what could’ve been done to prevent this. Another round of nothing getting done. Granted, this time things are different given the nature of the shooting, the number of casualties, and the dreadful message which can’t be ignored. But do I have hope that something will change this time? 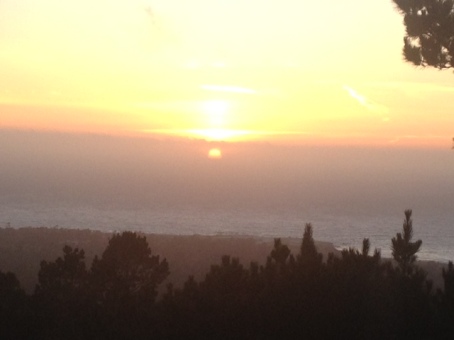 And to top it all off, Bernie loses quite clearly in CA. It’s over for him and all the young hopefuls. I guess I’m a young hopeful myself, having voted for him, although I’m a bit hesitant to flatter myself with that title (the “young” part). In truth, I wanted to see someone really try. I didn’t have hope that Bernie would change much, there’s simply too much in his way. I never expected a revolution, nor did I want one. So what did I want? I have to wonder—given my usual pessimism, a default position for me—did I want nothing more than a spectacle? Did I like him because he’s unique?

On the other hand, I believe in a lot of what Bernie stands for even though I don’t personally have much to gain by his proposed policies. I think his reasoning is sound. I didn’t at first. I think I said, out loud, “Free college? Is he nuts? Why is college suddenly a right?” Then Bernie went on to explain that college now is equivalent to what high school used to be. I’d always argued that college should not be necessary to get a decent job, and that it should not be dumbed down just to include those who don’t really care about anything but the piece of paper. Bernie, on the other hand, is coming at this problem from the other angle. Think of college as high school and everything changes. The solution then would be to make college free, to assume that is now the gold standard of what it means to be a moderately educated citizen. Hm. It works. He changed my mind. He changed my mind! Who does that?

Not to mention healthcare reform which we desperately need, an issue that’s extremely important and affects everyone. Too much to talk about there, certainly more than I can do in a blog post.

The point is, none of what he stood for sounded possible, but it felt good to vote for those ideas rather than some personality. To vote in a straightforward and simple way for what I think is right. Finally liberals get to stand on high moral ground, which is where many are in their hearts. Pragmatism is always the cleverest platform, the indisputable one, but it’s not to the point. When Bernie played nice with Hilary and let the email thing go, we saw someone who had greater schemes in mind, someone with much bigger fish to fry. Someone standing on higher ground. I think this is where Bernie’s strength comes from. Came from.

In fact, I don’t even like Bernie as a personality. He repeats himself to the point of inviting impromptu drinking games or throwing things at the screen, depending on your preference. A guy his age doing what he’s doing must be terribly neurotic. He’d be a ball buster at a dinner party. But so what? I don’t want to be friends with him. I agree with him. His ideas stand alone, on their own merit. And no thanks to the media, but that’s a rant for another day.

Did I feel the Bern on an emotional level? Probably in part. I did harbor a fantasy of watching Bernie verbally push Trump on his duff, rendering him momentarily speechless.

Hilary can do the same. I have to admit she’s a superb debater. But I don’t feel inspired by her, I don’t feel I’m voting for ideas. Her campaign ads feel like Bernie rip-offs. Her debates with Bernie felt like, “Oh what he said. I’ll do that too, but less. Since we all know none of these things will ever happen.” I could put all that aside. Once again, I don’t need to like her. But I feel I’m getting Obama II—the pragmatist. (Except his pragmatism felt real, like he genuinely wanted to heal the wounds of history, did it not?) And her recent victory feels a bit like a canned TV sitcom applause. She’s a woman, yes, fine. Obama’s black. Progress or a milestone? I’d say the latter. Progress comes from ideas, not from skin color or gender. Those external traits can be manufactured, as is evidenced by the Republican party’s endeavors in the past.

That said, unless something extraordinary happens, I’m voting for her. Obama II, fine. I guess. She has experience, she’s very competent and intelligent. She’ll push for women’s rights, but I hope she won’t do it at the expense of more important matters, just to hit that milestone and go down in history. She’ll get things done…and so will the Pacific as it carves out new niches in the shore, small spaces in which to find shelter from the wind. And really this kind of progress is all I could have hoped for with either candidate. There’s only so much one can do in these circumstances.

To end on a positive note, a la the evening news, here’s a dog on the beach trying to sail away with his ears:

Geordie inhales sand and then licks it off. 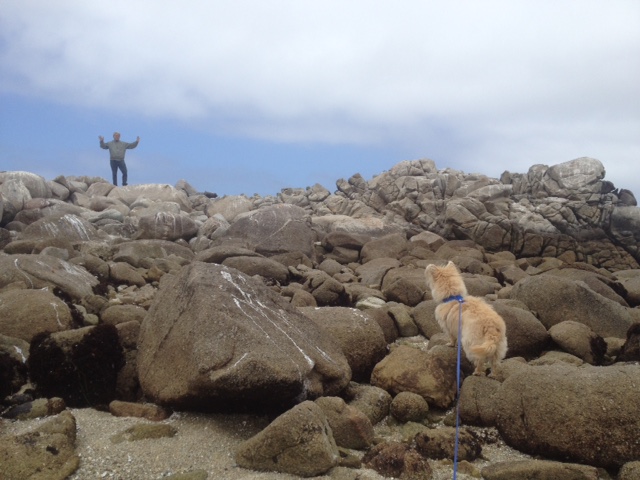 “Daddy, I’d totally join you if Mean Old Mommy would let me off-leash.” 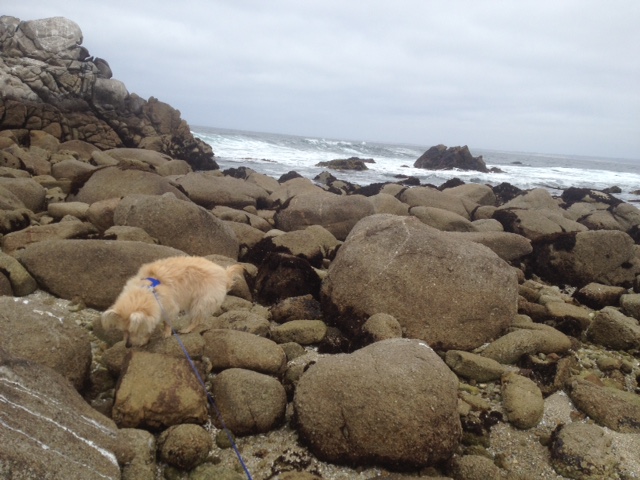 Note the sudden change of weather from the two photos above, which were taken just moments before this one…happy days are here again.

48 thoughts on “June Gloom in California”